Will South Korea Join the US Effort to Insulate Supply Chains From China? – The Diplomat 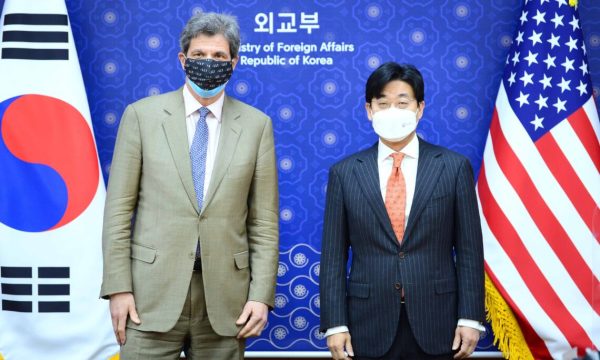 According to the U.S. State Department, Jose Fernandez, U.S. undersecretary of state for economic growth, energy, and the environment, called on South Korea to play a greater role in building “resilient” semiconductor supply chains in late December 2021, when he traveled to Seoul to participate in the sixth Senior Economic Dialogue (SED) between South Korea and the United States.

With its global leadership in semiconductor R&D, manufacturing technology, and global market share, South Korea certainly may play a very important role in the Biden administration’s ambitious global supply chain restructuring plan. In fact, South Korea is probably the only single country that can cooperate with the U.S. in three of the four vulnerable areas identified by Biden’s supply chain report released in June 2021: semiconductors, large-capacity batteries, and pharmaceuticals with active pharmaceutical ingredients, whereas China plays a leading role in the other one, critical minerals and materials.

The changing trend in the themes discussed at the SED also shows the importance of South Korea as a key ally in U.S. global policies and Washington’s competition with China, particularly in the context of the recent global supply chain disruptions.

Starting in November 2015, the first SED focused on “new frontiers” like health security, the North Pole, and the oceans. The “China issue” particularly emerged during the second SED in 2017, when South Korean delegates asked for cooperation in preventing the negative impacts of increasing China-U.S. trade conflict from reaching South Korea. Then U.S. delegates asked Seoul to take a more active role in Washington’s Indo-Pacific strategy in the third SED (in October 2018) and reaffirmed such issues during the fourth SED, which was held in November 2019. South Korea’s participation in global issues like fighting the COVID-19 pandemic and economic recovery was part of the key issues raised during the fifth SED talk (October 2020). Most recently, as already mentioned, the U.S. delegates asked South Korea to play an important role in building “resilient semiconductor supply chains” during the sixth SED, which was held in Seoul in December 2021.

The above storyline seems to suggest that, at least in terms of critical bilateral economic issues, Washington’s policy intentions and aims are becoming increasingly clear and detailed, especially with a clear focus on the supply chain realignment in the latest round of SED talk.

Over the years, South Koreans have always described their country’s geopolitical environment as a “tiny crevice” among great powers, especially between the U.S. and China. However, as the China-U.S. rivalry – or, more specifically, “strategic competition” as proclaimed by U.S. President Joe Biden – enters a new phase, heading toward a technological and financial decoupling, could there be new signs or maybe even a turnaround in South Korea’s strategic choice? Washington keeps pushing many countries to follow the United States’ policy lead out of the need to compete with and decouple from China, while Beijing has responded with its “dual circulation” plan, which emphasizes building up domestic demand.

These developments have been viewed with alarm in South Korea, where officials continuously stress the critical roles of both China – in economics – and the U.S. – in security – for their country.

“Most countries in the Asia-Pacific region have relied on the U.S. for security and had no choice but to stay close to China, which has shown through 20 years of dramatic economic growth. Globally, around 50 countries have the U.S. as their largest trading partner while about 100 countries have China as theirs,” Yeo Han-koo, South Korea’s trade minister, told The Korea Times on January 6.

“So not only Korea, but also other nations are feeling the same way. I think we are now in the process of figuring out a model of coexistence and sustainability between the superpowers.”

A public petition was listed on the official website of the Blue House in early 2021 asking the South Korean government to stop allowing investments from Chinese capital in South Korea’s semiconductor industry to prevent possible leakage of advanced technologies. Over 30,000 South Koreans signed the petition.

For multiple reasons, South Koreans’ attitude toward China has been worsening in recent years. But as a policy brief released by the Center for American Progress in December 2021 claims, “the country’s economic dependence on China creates risk when it comes to translating negative sentiment into policy action.”

This is especially true when it comes to South Korea’s semiconductor industry. According to the Korea International Trade Association (KITA), China accounted for over 40 percent of South Korea’s semiconductor exports as of October 2021. Nonetheless, the heavy reliance on the Chinese market has forced the South Korean government to consider a new market development strategy, something like Japan’s “China+1” market initiative, which has Japan staying in the Chinese market while actively developing other markets as well.

Apparently, the ASEAN market, which plays an increasingly important role in global supply chains, especially with respect to intermediate products, is a key direction for both Japan and South Korea. Economic and people-to-people ties with ASEAN countries have been repeatedly highlighted in the Moon Jae-in administration’s “New Southern Policy.” ASEAN countries will remain an important pivot point for South Korea’s southern and global diplomacy, regardless of which party wins the presidential election in March 2022.

However, while Seoul and Tokyo share some concerns and even have adopted some common strategies, the possibility of in-depth cooperation between Japan and South Korea in line with the U.S. supply chain realignment targeting China remains low, at least in the short term. Political, historical, and territorial disputes continue to prevent Japan and South Korea from engaging in more comprehensive or deeper cooperation. In fact, we have seen the exact opposite occur: In 2019, the Japanese government imposed restrictions on specific technology exports to South Korea, after tensions over historical issues between Seoul and Tokyo significantly escalated.

Meanwhile, as Dr. Rajiv Kumar of Hankuk University of Foreign Studies has noted, India has been “striving to emerge as a supply chain hub for key industries by ending China’s control.” In a paper published in the Journal of Indian and Asian Studies in July 2021, Kumar found that both India and South Korea have assessed the safety of the current China-centric supply chains, especially against the background of the outbreak of the COVID-19 pandemic. Pointing to the increase of South Korean investment in India, Kumar suggests that cooperation between India and South Korea in the realignment of current supply chains may effectively cope with China’s influence, which subsequently may help to build a new “India-centric supply chain.” Whether it is feasible or not in the short term, his point is well worth thinking about.

At a time when a China-U.S. decoupling seems to be inevitable, and Washington is pushing Seoul to play a more active, reliable, and resilient role in global supply chain realignment, should South Korea cooperate with the U.S. on all fronts, such as working with Washington to build a “de-Sinicized” regional and global supply chain centered on Japan, India, and ASEAN countries?

This will be a long-term game, and the Americans seem to have decided to play it hard, even when it comes to pressuring U.S. allies. The United States has not only requested South Korea’s semiconductor manufacturers provide internal information on exports to the Chinese market but also pressured a South Korean company to halt shipments of advanced machinery to its semiconductor plant in China.

As U.S. pressure increases, is there no longer a “middle way” between the world’s two leading economies for South Korea to follow? Some South Korean analysts are coming to that conclusion. Choi Jin-baek of the Institute of Foreign Affairs and National Security warned in an April 2021 analysis:

…the pace of the U.S.-China decoupling could accelerate in the coming years. This will disrupt Korea’s close economic relationship with China that Seoul was able to maintain when the level of economic interdependence between Washington and Beijing remained high. Hence, Beijing’s push for ‘dual circulation’ indicates that Korea’s strategy of ‘strengthening alliance with the U.S. while deepening economic cooperation with China’ is no longer a viable option.

5 Questions All Entrepreneurs Should Ask Before Hiring an Accountant