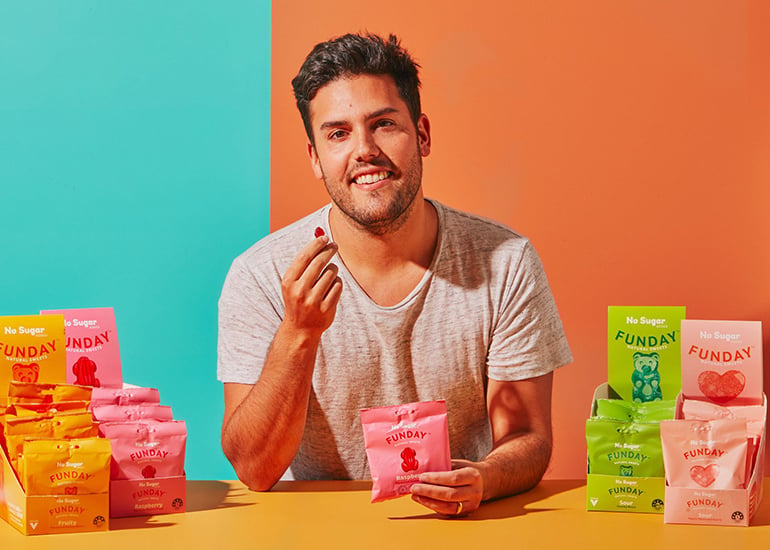 After years of perfecting his product, Melbourne-based entrepreneur Daniel Kitay launched FUNDAY Natural Sweets in May 2021 to change how we view, and taste, lollies. In that short time, he’s built a brand that’s already starting to expand internationally.

It’s hard to believe that FUNDAY Natural Sweets only launched last year. It already feels like a well-established brand, being stocked at Chemist Warehouse from the get-go and recently on offer in Woolworths supermarkets across the country.

Daniel started working on a healthier treat for lolly fans a few years ago. He began concocting sugar-free sweets in the kitchen at home, then moved on to developing the perfect flavour with a team of food scientists, chefs and nutritionists. They launched the real ingredients, no sugar added, high-fibre FUNDAY sweets to instant demand, with Chemist Warehouse snapping them up at launch.

“Chemist Warehouse really liked the lollies as there’s nothing like it in Australia,” says Daniel. “It’s a really innovative product and I think they just really liked it. They sold out within about four weeks across the country.”

Then Melbourne went into another lockdown, and Daniel faced the challenge of keeping up the momentum of his new brand.

The sudden lockdown was all the impetus Daniel needed to approach Amazon Australia about setting up shop to sell his products online. In doing so, he joined more than 11,000 Australians who now sell through Amazon.

“I think when I started the business I was always quite keen to get our products on Amazon and give it a go,” he explains. “Once we had product available, I reached out to them and said I think it would be a good idea. They were pretty keen to have us on the platform.”

FUNDAY was given a dedicated Amazon account manager which Daniel considers a huge asset. From the very beginning he was given plenty of advice and support to get things up and running quickly and efficiently.

“As a small business with a very lean team, we got a bit of hand-holding,” he says. “Just in terms of how to set things up, how to manage our inventory, send our first lot of orders, warehousing and how to set up the pricing.” 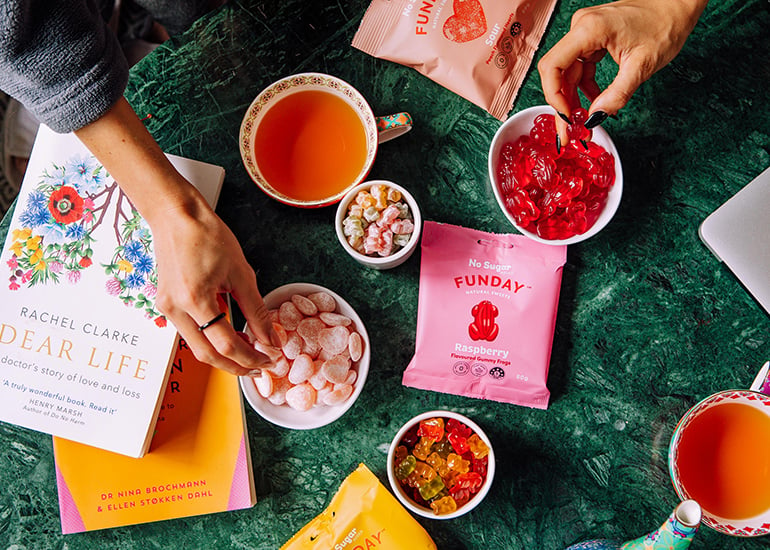 It was all a welcome help to a small business just starting out, especially the Fulfilment by Amazon (FBA) offering.

“We were initially selling the products from my home because we didn’t have an office at that stage as we’d just launched,” explains Daniel. “With FBA, we were able to deliver stock direct from their warehouse and it was a really big benefit for a small business who weren’t really sure how to best deliver the stock.”

Once FUNDAY stock was delivered to the warehouse in bulk, Amazon managed the picking and packing for customer order fulfilment. It’s run like a well-oiled machine, from Daniel’s perspective, and he notes that they’ve never had any fulfilment issues or received a single negative review from a customer.

“They’ve never let us down,” he says. “I think the confidence is that I’m an existing Amazon customer from the beginning and I had a good experience with pretty much every order that I’ve ever received. So I was pretty happy to let them take care of it.”

Expansion to other markets, all in the first year

FUNDAY has taken off at such a rocket pace that it is little surprise Daniel is already considering expanding into other markets.

“That’s one of the powers of working with a global ecommerce company and it’s one of the advantages for us in working with Amazon in Australia and working really closely with them. I think that’s really powerful for a small business.”

Amazon Australia’s recent Global Empowerment research found that almost a third of Australian small-to-medium-sized business owners (not all Amazon sellers)¹ have just launched or plan to expand to new countries within the next two years. From those that have already launched overseas, 96 per cent say they have “no regrets” and 80 per cent wished they’d done it sooner.

Startups like FUNDAY show just how the right product and the right support can help take a brand from Australia to the world, with less barriers of entry to international markets.

1. Take action and just go for it

It’s very easy to talk about a business idea that’s ‘going to change the world’ or ‘going to make you rich’ but in reality, most people just talk about it, and it never gets actioned. It’s amazing what can happen once you make the decision to start your business and quit everything to make it happen.

2. Solve a problem in the market

The advice above comes with caution as most new businesses don’t succeed. You want to come prepared with a product or service that genuinely solves a problem in the market. Then be prepared to work harder than you’ve ever worked before.

Despite Australia’s population being a generous 25 million, FUNDAY solves a problem, and can serve markets that transcend our local borders. Think about a product or service that has the potential to serve the global population which means the impact you and your business can have are significantly greater.

Want to sell online? Find out all the ecommerce growth opportunities and tools available with Amazon Australia at sell.amazon.com.au/sell.

This article is brought to you by Startup Daily in partnership with Amazon Australia.

Durable-goods Orders Fell in February on Broad-based Declines, But…

Durable-goods Orders Fell in February on Broad-based Declines, But…