Prepared Remarks are Way too Long 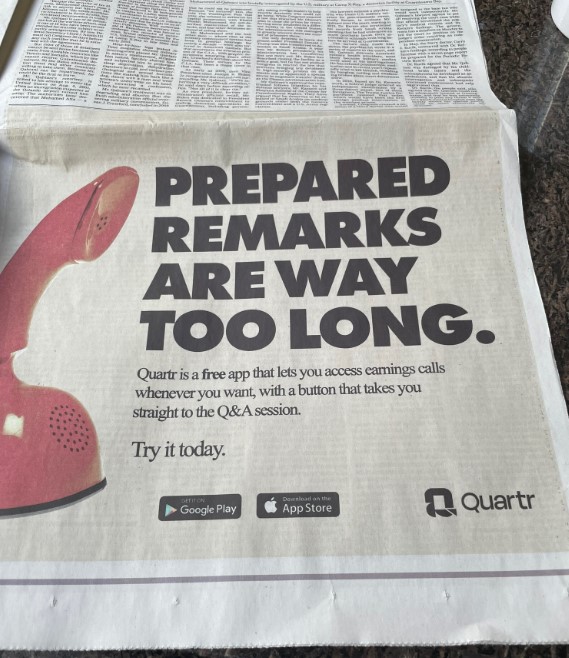 I never used to listen to earnings calls because there was never an easy way to do it. I always followed the numbers, but they paint an incomplete picture. Listening to management communicate with shareholders gives you context that can’t be found in a financial statement.

We sat down on Friday with Peter Boockvar, who is known for his macro views. He surprised us by saying he listens to 50 earnings calls a quarter. And he absolutely shocked us by saying that he’s still using a landline to dial in. Okay, I might have made that part up, but hit the link for my reaction.

We’re proud investors in Quartr, and I want to share the story of how they went from cold emailing us to having commercials on CNBC in just eight months.

In April, this email hit the Animal Spirits inbox. 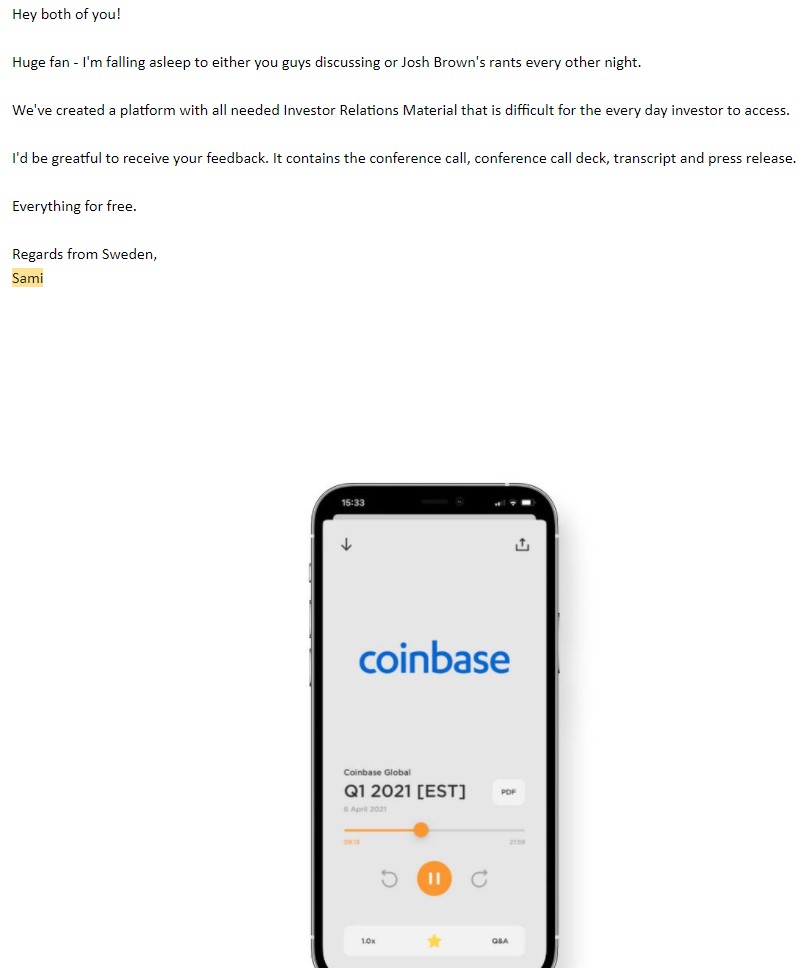 I downloaded the app, poked around, and was excited about what I was looking at. A week later, I shared this on Twitter.

You can also open a PDF of the earnings release inside the app.

At this point, there was no talk of us doing business together. I was just a fan of the product, and after a few emails back and forth, Sami seemed like an A+ person.* It’s a no-brainer getting behind a great person with a great product, and I was thrilled to see that my tweet helped drive users.

Quartr’s 28-day volume is now 10x this, and their goal is to reach 1 million active users at year-end. They’re well on their way.

When Sami asked if Ben and I wanted to invest, we didn’t jump at the opportunity. We liked the idea but weren’t sure that this could scale and ultimately generate revenue. We decided to write a small check because Sami and one of his co-founders, Oscar, seemed like such terrific people that we wanted to help them in any way we could. Their passion was infectious, and we wanted to be involved. The worst that could happen is we lose a little bit of money.

A couple of months ago we were talking about mentally writing this down to zero. It wasn’t that we didn’t believe, just that statistically speaking, most private investments go that way, and we didn’t see any reason to think this one would be different. But the progress they’ve made recently has made us much more confident. Now, there’s only a 95% chance of a complete wipeout. 😊

Quartr did another raise in the fall, this time with some serious backers. The largest shareholder of the largest broker in Scandinavia was in the round, as well as Peter Sterky, the former CFO and COO of Spotify. Given the improvements to the product, the new investors, and their message spreading on social media, we felt good enough to make a more meaningful investment.

The strides that they’ve made in such a short period of time is ridiculously impressive. The product keeps getting better and better. I’d be a user even if I wasn’t an investor.

This weekend, Quartr is advertising in The New York Times. I’m so proud of Sami and the team and what they’re building.

We’ve been making private investments over the last 12 months. Cliche, I know, but we think we’re uniquely situated to add value to these companies, given our subject matter expertise, distribution, and network.

We’re only working with companies that fit the Quartr mold. Great people, great product. And of course, we’re staying in our lane. At least for the most part. Maybe we’ll work on things one lane over, but they’ve got to be at least on our highway. You might have the greatest ice cream cone company in the world, but I’m pretty sure we’re not the right partners for something like that.

If you think we can help, please reach out.

*Turns out Sami is A++. I genuinely love him and am so happy to be on this journey with him.

Roth IRA to save college