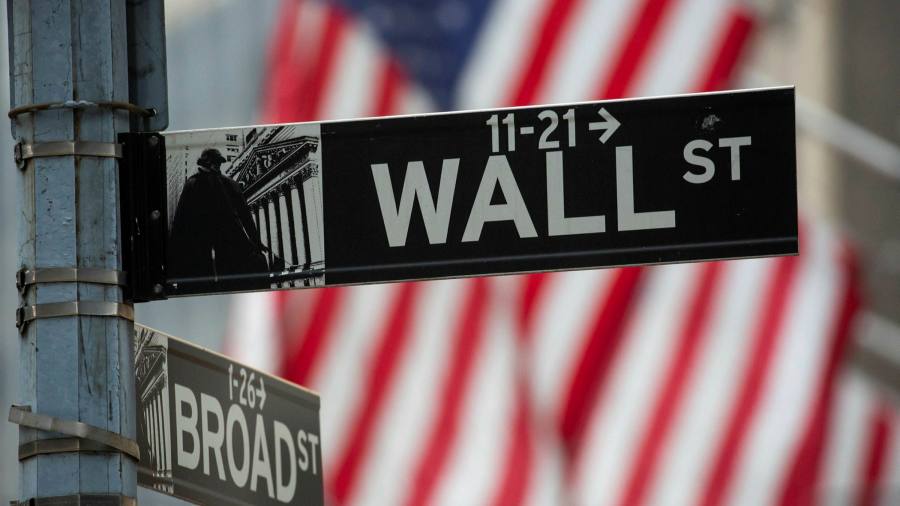 Good morning. This article is an on-site version of our FirstFT newsletter. Sign up to our Asia, Europe/Africa or Americas edition to get it sent straight to your inbox every weekday morning

The US stock market suffered its worst start to the year since the global financial crisis.

The threat of rising interest rates, slowing corporate earnings growth and simmering geopolitical tensions led to the biggest monthly decline for the S&P 500 since the onset of the coronavirus pandemic and the weakest January since the depths of the global financial crisis in 2009.

Technology stocks bore the brunt of the selling. The tech-heavy Nasdaq Composite index fell 9 per cent, its worst one-month decline since November 2008. It was a record set of results from Apple that halted the sell-off, preventing the S&P 500 from recording its worst January sell-off on record.

Looking further afield, the FTSE All-World index had its worst start to a year since 2016 when markets were upset by concerns about growth in China.

Investors are braced for more volatility with tensions rising between the west and Russia in Ukraine, and the US Federal Reserve preparing to aggressively raise interest rates.

Are you preparing for further losses in the stock market or do you think we are past the worst of the falls? Do you think the stock market will make gains this year? Share your thoughts at firstft@ft.com. Thanks for reading FirstFT Americas — Gordon

Five more stories in the news

1. Russia launches blistering attack on the US Russia accused the US of “whipping up hysteria” over a potential invasion of Ukraine at the UN Security Council yesterday. Meanwhile, in Ukraine the police arrested a group of suspects for allegedly planning mass riots in multiple cities including the capital Kyiv.

2. New York Times buys internet phenomenon Wordle Josh Wardle, a Brooklyn software engineer who created Wordle as a gift to his girlfriend, sold the site to the Times for a price in the “low seven figures”. It is the latest move by the newspaper to boost its products and achieve its goal of 10mn digital subscribers by 2025.

3. Resignation triggers new crisis in Argentina Máximo Kirchner, leader of the Peronist bloc in Argentina’s lower house of congress and son of powerful vice-president Cristina Fernández de Kirchner, resigned yesterday. He quit in protest at the country’s outline deal with the IMF to restructure $44.5bn of debt. In Peru, prime minister Mirtha Vásquez resigned after less than four months in the job.

4. FTX valued at $32bn in new funding round Japan’s SoftBank and Canada’s Ontario Teachers’ Pension Plan were among the investors that participated in a new $400mn investment round for the Bermuda-based group cryptocurrency exchange, led by 29-year-old crypto billionaire Sam Bankman-Fried.

5. Boris Johnson rejects calls to resign The UK prime minister refused to resign following the publication of a highly anticipated report into the so-called partygate affair at the heart of British government. His stumbling response to the report’s findings and revelations the Metropolitan Police were investigating 12 separate alleged parties rekindled talk of a potential leadership challenge.

Alphabet earnings Google’s parent company reports earnings for its most recent quarter, kicking off a series of updates from several big tech companies this week. ExxonMobil and UPS report earnings before the market opens while General Motors and Starbucks report after Wall Street closes.

What else we’re reading

Big Tech increases funding to US think-tanks The world’s biggest tech companies are pouring money into US foreign policy think-tanks as they argue that stricter competition rules will benefit China. Total donations to four of the most prestigious research groups have risen from at least $625,000 in 2017-18 to $1.2mn in 2019-20, according to an FT analysis.

The international cult of Vladimir Putin If the Russian leader triumphs in Ukraine, his thuggish style will gain new followers, argues Gideon Rachman in his latest column. “His fan club is global, spanning Asia, the Middle East, the Americas and Europe,” Gideon writes.

Who benefits from Japan’s panic over ageing? There is no upbeat discussion to be had on Japan’s declining population, but neither is there a way to avoid discussing it, and particularly how Japanese corporations can function with fewer humans. While outsourcing jobs overseas makes sense, businesses may not be ready.

Ireland’s coalition under strain Apart from the easing of the pandemic, Prime Minister Micheál Martin’s fractious coalition government has little reason for optimism. The taoiseach has lost popularity after scandals and is struggling to show progress on problems such as housing and healthcare.

You don’t need to be a Stem genius to succeed in finance and tech Karina Robinson writes that she was the worst Spanish equities analyst in the City of London, so much so that in 1987, she was fired from Morgan Grenfell after 15 months. But you do not need to be a maths genius, a computer scientist or a PhD holder in physics to succeed, she contends.

“Those working behind the scenes who can bridge the understanding gap between leaders in siloed disciplines and roles . . . play a crucial role” — Karina Robinson, chief executive of Robinson Hambro

Whether for outdoor swimming, running or kick-boxing, the FT fashion team shares their tried-and-tested activewear picks for cold-weather workout gear.

Thank you for reading and remember you can add FirstFT to myFT. You can also elect to receive a FirstFT push notification every morning on the app. Send your recommendations and feedback to firstft@ft.com

Recommended newsletters for you

FT Asset Management — The inside story on the movers and shakers behind a multitrillion-dollar industry. Sign up here

The Week Ahead — Start every week with a preview of what’s on the agenda. Sign up here

What Does Russia’s Invasion of Ukraine Mean for China in the Arctic? – The Diplomat