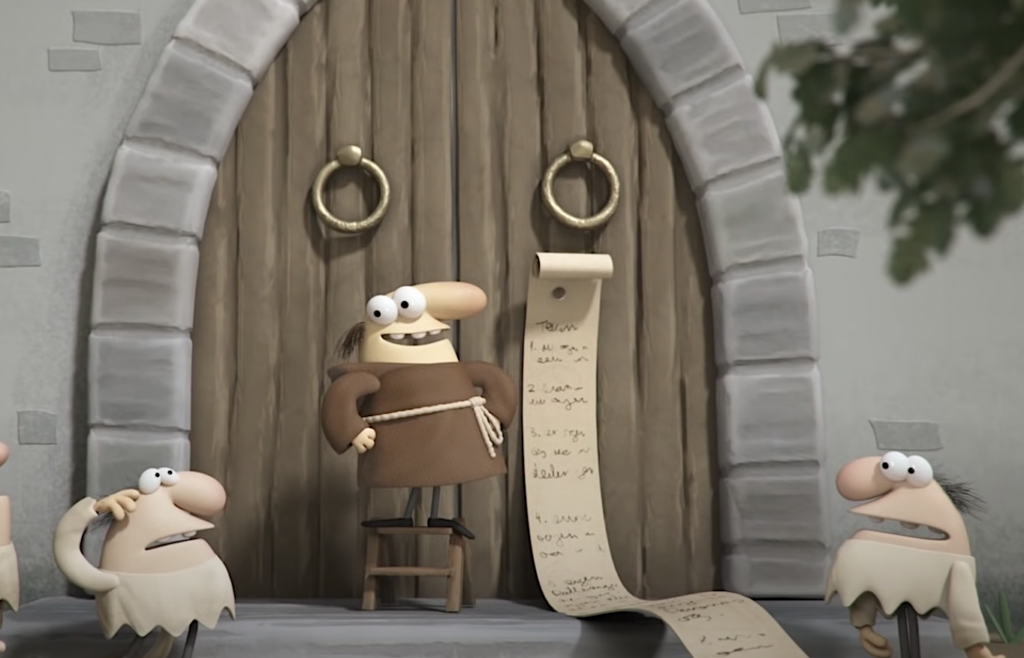 Whatever our religious background, we all sooner or later have occasion to speak of nailing theses to a door. Most of us use the phrase as a metaphor, but seldom entirely without awareness of the historical events that inspired it. On October 31, 1517, a German priest and theologian named Martin Luther nailed to the door of Wittenberg’s All Saints’ Church his own theses, 95 of them, which collectively made an argument against the Roman Catholic Church’s practice of selling indulgences, or pardons for sins. Luther could not accept that the poor should “spend all their money buying their way out of punishment so they can go to heaven,” nor that it should be “easier for the rich to avoid a long time in purgatory.”

In other words, Luther believed that the Church in his time had become “way too much about money and too little about God,” according to the narration of the short film above. Created by Tumblehead Studios and showcased by National Geographic for the 500th anniversary of the original thesis-nailing, its five playfully animated minutes tell the story of the Reformation, which saw Protestantism split off from Catholicism as a result of Luther’s agitation. It also manages to include such events as Luther’s own translation of the New Testament, previously available only in Greek and Latin, into his native German, the publication of which created the basis of the modern German language as spoken and written today.

Luther’s translation gave ordinary people “the opportunity to read the Bible in their own language,” free from the interpretations of the priests and the Church. It also gave them, perhaps less intentionally, the ability to “use the words of the Bible as an argument for all sorts of things.” Luther’s thoughts were soon marshaled “in the power struggles of princes, in revolts, and in the struggle between kings, princes, and the Pope about who actually decides what.” Squabbles, battles, and full-scale wars ensued. The consequent institutional schisms changed the world in ways visible half a millennium later — but they first changed Europe, where traces of that transformation still reveal themselves most strikingly. Few travelers can be trusted to find and explain those traces more ably than public-television host Rick Steves.

In Luther and the Reformation, his 2017 special above, Steves visits all the important sites involved in the central figure’s life journey, a representation in microcosm of Europe’s grand shift from medievalism into modernity.  In more than 40 years of professional travel, Steves has paid countless visits to the monuments of Catholic Europe. Appreciating them, he admitted in a recent New York Times Magazine profile, required him to “park my Protestant sword at the door.” His story-of-the-Reformation tour, however, lets him draw on his own Lutheran tradition with his characteristic enthusiasm. That enthusiasm, in part, that has made him a such a successful travel entrepreneur, though he presumably knows when to stop amassing wealth: after all, it’s easier for a camel to go through the eye of a needle than for a rich man to enter the kingdom of God. Or so the New Testament has it.

Christianity Through Its Scriptures: A Free Course from Harvard University

Based in Seoul, Colin Marshall writes and broadcasts on cities and culture. His projects include the book The Stateless City: a Walk through 21st-Century Los Angeles and the video series The City in Cinema. Follow him on Twitter at @colinmarshall or on Facebook.

Be honest, is it time to fire some of your clients?

Be honest, is it time to fire some of your clients?